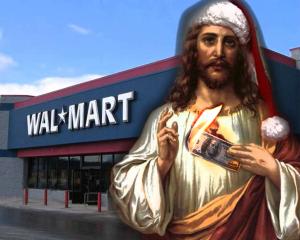 Wal-Mart Asks Workers To Donate Food To Its Needy Employees

A Cleveland Wal-Mart store is holding a food drive — for its own employees.

The Cleveland Plain Dealer first reported on the food drive, which has sparked outrage in the area.

“That Wal-Mart would have the audacity to ask low-wage workers to donate food to other low-wage workers — to me, it is a moral outrage,” Norma Mills, a customer at the store, told the Plain Dealer.

A company spokesman defended the food drive, telling the Plain Dealer that it is evidence that employees care about each other.

“This store has been doing this for several years and is for associates that have faced an extreme hardship recently,” spokesman Kory Lundberg told us.

Lundberg says an example of this would be a recent layoff in the family or some other financial hardship.

Wal-Mart has been criticized for paying low wages to its 2.2 million employees.

Last week, 50 people were arrested after protesting the retailer’s pay at a store in Los Angeles.

The original version of this story stated that Wal-Mart was asking customers to donate food. The food drive is actually among employees.